МТТ (Multi-Table Tournament) – a poker tournament with the following structure: participants start playing sitting at different tables. MTT begins at a scheduled time and ends when one of the participants wins all the tournament chips.

Like in any other tournament MTT utilizes a structure with growing blinds. Blinds increase by 1,5 – 2 times on each new level. Level intervals are preset. A 5-minute break occurs every hour. Typically it takes 3-4 hours to reach the bubble stage. 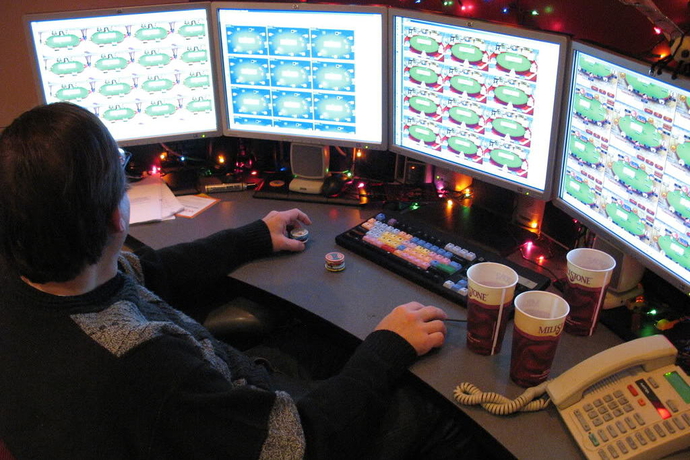 Pay zone is defined for every tourney, but usually 10-20% of participants reach it. Almost always the winnings increase the higher on the tournament ladder the participant gets and the biggest prize is grabbed by the winner of the MTT.

Pros and Cons of the MTT as a Poker Game

The most pleasant feature of MTT is the possibility of winning. For instance, winning a tourney with 1000 players would give the lucky player a prize which is 200 times bigger than the buy-in (a fee player pays to participate in the tournament).

However, it is impossible to beat 1000 players without getting lucky. Thus, high variance is in the nature of the MTT. This means that there is a huge deviation of winnings from expected value. Even experienced players may not manage to reach a single final table playing 100 MTTs. This would lead to negative results.

Therefore, if a player is eager to specialize in MTTs and takes it seriously he should:

– Be tough mentally and be in a good shape;
– Conduct conservative bankroll management;
– Avoid MTTs with enormous player pools;
– Play several MTTs at the same time.
– Learn why limping in is bad and what strategy is best to use.

Many players try to reach pay zone by any means, as any further success depends on luck. Therefore such players believe that frequent pay zone winnings would result in a positive ROI. However this strategy is not optimal. Bottom pay zone positions usually rewards players with prizes worth less than 2 buy-ins. Moreover it is quite difficult to achieve such results. You won’t be able to reach the pay zone in most tournaments regardless of how hard you try.

Give an honest answer to this question: are you ready to play for 4 hours straight to get less than 1 buy-in net profit? If this is fine for you then ok! But in that case perhaps you should switch to ring games or S&Gs? Variance would be lower and the games are easier to beat. MTT is quite a difficult discipline. In order to become a successful poker player you should have some skills and a sportsmanship-oriented nature.

Some players fall for another extreme. They battle to win the first prize in every single tournament. Well, it is good but let’s face the truth. Even talented and hardworking players would win tournaments rarely. Beginners will have to wait for the first triumph quite long.

Thus, a worthy and realistic result would be reaching final table. Well, you would not make it often but not too rarely. As soon as you manage to reach the final table you will get good compensation for your time and efforts.

Growing blinds force players to change their strategy within a single tournament. Stack size is important: having 5000 chips with 100/200 blinds requires a different strategy from 1000 chips with the same blinds in play. In order to take both factors into account poker players use the stack/BB (Big Blind) ratio. This ratio helps to divide the tournament into stages.

In addition, there is a bubble stage. This is the game period coming right before pay zone play. Bubble stage is associated with slow gameplay and different strategy. Many players start to play passively trying to survive. The time of approaching the bubble depends on the players. An average MTT utilizes a structure with the bubble starting when there are two times less players than pay zone positions. Let’s have a look at an example with 200 paid positions. In this case, the bubble would start when there are 300 players remaining. This stage would finish when 200 players remain in the game.

Bubble stage may start in middle and late stage. If you reach the bubble in early stage you may feel good! Everything goes fine; your stack is one of the biggest.

There are two playing styles: tight and loose. A player preferring tight style tries to win pots with good hands only. Loose players prefer to play many hands. The early stage of an MTT is suitable for the tight style. Let impatient players eliminate each other. Go after the pot with strong cards when you are quite sure of your ability to win it. There is no need to rush. Just remember that it is impossible to win a tourney in the early stage, but it is very easy to lose all the chips.

Loose style can be quite effective as well. But this style should be applied by players who can read the game and players well. Beginners ought to stick to tight playing style.

Did you play tight during the early stage? – Good! Keep going and don’t change your strategy too much. We should continue playing in the same way but add steals and re-steals.

Steal – raise with an average hand. The goal of this trick is to steal blinds. Blinds become quite big in the middle stage of MTTs. Thus, any blinds you snatch would be a good addition to your stack. Steal should be applied when you are in late position i.e. when you are on the button or next to it. Moreover, your hand should not be too weak. For instance, 84 is not good enough for a steal. KT would be good enough.

Re-steal – raise to win the chips your opponent used to steal. This is even more aggressive and risky trick. Thus you should use it with quite strong hands and only when you are sure that the opponent tries to steal (and he doesn’t play with monster cards like AA). Typically, players use the whole stack (all-in) to re-steal.

Standard raise doesn’t have any value anymore. The reason is simple: if you raise for a standard 2,5-3 BBs and even one opponent calls, the pot will be bigger than your stack. Thus, you would have to be all-in regardless of the flop. This means that you should push instead of attempting a raise. It is quite likely that all the other players will fold and you will be able to win the pot easily. Therefore, the push or fold strategy should be applied in later stages.

You should change your game a bit in this stage. This is a decisive time when players get in the money. Your current tournament position becomes extremely important. Your chances of getting into the money are quite high if you are somewhere in the middle of the counts. However, even a single mistake may lead to a significant drop. In that case, you will have to fight for survival. You should avoid it by any means. Therefore, it is wise to play tighter than you usually do.

The opponents will try to eliminate you if you are at the bottom. Nevertheless, there is no point of playing passively. Constant folding would result in a quick elimination. Growing blinds would kill you and absorb your stack. Your participation would end without any result or profit. Thus, you should risk more often and try to double your stack, try to climb up and get into the middle of the counts.

Having a huge stack would give you a great edge. There would be an enormous difference between you and the others. They would be afraid of a potential defeat and you won’t have any reason to fear them. You should use this advantage and start putting pressure on opponents. They would be too scared to push against you. This is a great chance to increase your stack and enjoy the game. Thus, you should play more loose after securing the stack advantage.

You should watch your opponents carefully regardless of MTT stages. Try to notice how often does a player go to flop, how aggressive he is, what does he do postflop, whether he steals blinds or not etc. Adapt to every single competitor, read your opponents. If you do it right, you will be able to win more chips and achieve greater tournament results.