Many people wouldn’t think of playing bingo as gambling. This is probably because it’s always been a game played in communities and it has a long-standing reputation as a great way to raise funds for local causes. In fact, in the 1930s bingo really first took a hold in the States as a church fundraiser, and by the end of the decade more than 10,000 games a week were taking place in churches across the country.

But in fact, if you go online and play bingo today, you’ll find that the jackpots up for grabs are just as amazing as if you play progressive jackpot slots games. There are many offers and promotions out there and interested gamers should look into these regularly. For example, you can even play free online bingo from www.costabingo.com every Friday night where there’s a £10,000 guaranteed jackpot to be won. What a great way to start the weekend if you happened to land the top prize – especially as it costs you nothing to play! 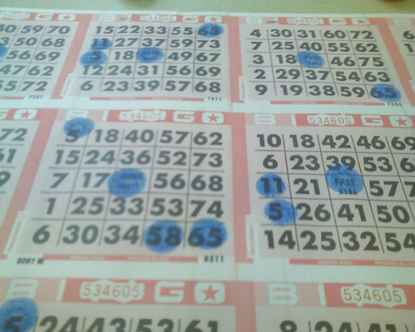 The great thing about playing bingo is that there’s no need to devise a cunning strategy in order to win – in the same way that you’d have to do if you were playing a game of poker. All you need to do for bingo is choose which games to play and pick the tickets you want. Unlike the old-fashioned form of bingo where players would have to concentrate on the number calls so that they didn’t miss out on a possible win, with online bingo the software does the concentrating for you, marking off any matching numbers as they are called. In fact, if there’s a game you want to play, but you can’t spare the time to be at the computer when it’s going on, you can even pre-buy the tickets and they will be played through in your absence. The next time you login to the site, you might find a nice win credited to your account!

But even though you can win some amazing and life-changing jackpots playing online bingo, there’s something a bit different to the game compared to other gambling games. Somehow it’s not viewed as gambling and it’s probably this that makes it a game that appeals to everyone, no matter their age or place in life.

Part of the difference with bingo is that people can enjoy socializing while they play – something that’s not possible when you’re playing poker, for example, which requires all your concentration to win. But on bingo sites, the chat rooms are always busy with lots of gossip and jokes bouncing around between players, who are all in a great mood as there’s a feeling of expectation and anticipation that a win could be about to happen at any moment! And added to the fun are the frequent chat games that run alongside the main bingo games, where players can win extra bingo tickets and small cash prizes.

Bingo’s definitely a form of gambling, but it doesn’t always feel that way!